Wieluń district is located in the south-western part of Łódź Region. It borders 4 other districts of the region: districts of Wieruszów, Sieradz, Łask and Pajęczno and Kluczbork and Olesno districts located in Opole Region. The district covers the area of 920 square kilometres with the population of 78,000. Wieluń is inhabited by 32,700 people. The district comprises 1 town of Wieluń, the seat of the district and 10 communes with their seats in Biała, Czarnożyły, Konopnica, Mokrsk, Osjaków, Ostrówek, Pątnów, Skomlin, Wieluń and Wierzchlas.

Wieluń – a town, the capital of the region of Wieluń, charter granted before 1283. Wieluń has an original mediaeval spatial layout, formerly surrounded by the 16th-century defence walls. Till today their relicts and ruins of towers: “Męczarnia”, “Prochownia”, “Swawola” and “Skarbczyk” can be seen. A monumental “Cracow Gate” and a classical town hall which was added to it in 1842 are preserved as well. A castle and the outline of its moat belonged to town’s fortifications as well. The palace, housing presently the local authorities, was erected in 1840 on the basis of the remains of the castle.

At 4.40 am Hitlerian Luftwaffe by bombing the old town in Wieluń started World War II. This mediaeval capital of the Wieluń region, bombed several times within a few hours, was destroyed in 70%. About 1,200 citizens were killed.

Centrally located ruins of the Romanesque collegiate church (once one of Poland’s most beautiful churches) are the symbols of these tragic events. The church used to have 9 altars and 3 chapels serving as the place of bishops’ synods and meetings of Polish gentry. Museum of Wieluń Region located in the former convent of Bernardine sisters is one of the most interesting regional museums in the Region of Łódź. It exhibits archaeological findings from the indelta of the Warta and Prosna rivers, featuring the history of settlement since 1200 BC. Old farmers’ and craftsmen’s tools, weavers’ and smiths’ products, coopery and some elements of furnishings can be seen on display. Militaries, maps and plans, coins and memorabilia related to independence fights are exhibited as well. 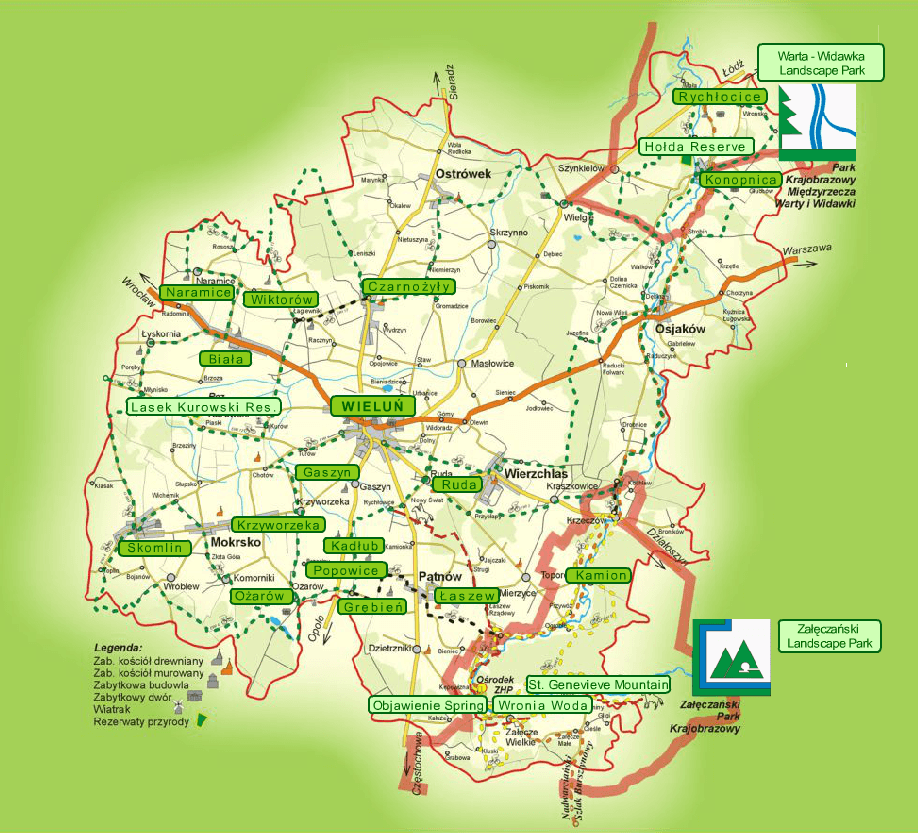 Kamion – a former town, charter granted before 1462 till the end of the 16th century, a well-known holiday centre on the Warta river.  Worth visiting / sightseeing: a wooden chapel (1750-70).

Osjaków – a former town, charter granted from 1446 to 1793. Worth visiting / sightseeing: a brick- built parish church dedicated to St Jadwiga (1912-14); a former synagogue (the beginning of the 19th c.) and a Jewish cemetery (today without tombstones).

Toporów – a former town, charter granted from the 15th to16th centuries, a well-known holiday centre on the river Warta. Worth visiting / sightseeing: a contemporary, brick-built, parish church – in its interior a picture painted in 1996 by an eminent Polish painter, Jerzy Duda-Gracz.